Leonardo da Vinci (1452 – 1519) is one of the world’s greatest thinkers, artists and philosophers. In several different fields, from science to astronomy, he proved to be both innovative and several centuries ahead of his contemporaries. He is considered to be a key person in the birth of the European Renaissance period, which saw a flowering of new ideas, scientific discoveries and creation of beautiful art.

Leonardo was born an illegitimate son of a Florentine noble and peasant woman and grew up in Vinci, Italy. In his formative years he developed a love of nature and from an early age displayed his remarkable academic and artistic talents and capacities.

In 1466 he moved to Florence where he entered the workshop of Verrocchio. His early style reflected his teacher, but he soon developed an artistic sense which went far beyond his teachers rigid style. His first work of great significance was the “Adoration of the Magi” commissioned by monks of San Donato a Scopeto. Although unfinished, the work was a masterpiece and introduced several new ideas. In particular he introduced the themes of movement and drama. He also pioneered the use of Chiaroscuro. This is the technique of defining forms through the contrast of light and shadow. This would be later used to great effect in the Mona Lisa.

In 1482 Leonardo went to the court of Ludovico Sforza for 16 years in Milan. Here he continued painting and also branched out into other interest such as engineering and anatomy.  During this period he painted the famous “Madonna on the Rocks” and also “the Last Supper” This has been described as one of the greatest spiritual paintings. With Christ at the centre of the picture it embodies great feeling and action as Christ is about to announce his imminent betrayal. Unfortunately over the time the quality of the original painting has deteriorated despite frequent restoration attempts.

In 1499 his patron L. Sfoza was defeated by the French invasion, thus Leonardo returned to Florence. During this period he painted the fresco of the battle of Anghiari. This artwork was to exert tremendous influence over future artists. However it was unfortunately never completed and was later destroyed. It was also in this period that Leonardo completed The Mona Lisa. The Mona Lisa is one of the worlds most famous and intriguing pictures. The Mona Lisa is a portrait of a wife of a Florentine noble. For several days she came to Leonardo and sat for her portrait to be painted. However she refused to smile, Leonardo even tried hiring musicians but to no avail. One day just for a fleeting second she gave a faint smile and Leonardo was able to capture it. Her smile encapsulates a tremendous mysteriousness which is both fascinating and intriguing. Sri Chinmoy said of the Mona Lisa.

In this picture Leonardo masters the techniques of sfumato and chiaroscuro. Sfumato involves the most gradual switch from colour to the other giving a very delicate and expressive images. Chiaroscuro as mentioned before highlights the contrasts light and shadow. In the Mona Lisa this is most evident in the contrast between face and dark background.

In this period Leonardo extended his studies into engineering, science and other subjects. There seemed to be no end to his interest. He made copious notes in his complex mirror handwriting. A lot of which wasn’t deciphered in his lifetime. He also drew complex models of machines, in particular he was fascinated by flight. He used to buy birds just so that he could release them so he could enjoy watching them fly away. He also attempted to build a flying object himself. Machines that he drew on paper, such as helicopters, would become a reality many centuries later. If his medicinal studies had been published, it would have revolutionised the science, as he was one of the first to understand the circulation of blood within the body. There seemed to be no limit in the scope of his interest and work.

Between 1506-1510 Leonardo spent time in Milan working on behalf of the very generous French King Lois XII. In 1513 he travelled to Rome where he enjoyed the patronage of the new Medici pope, Leo X. Here he worked with contemporaries such as the great Masters Michelangelo and Raphael. In 1515 he left to settle at the castle of Cloux, near Amboise by the kind invitation of Francis I of France. Here he spent his last years free to pursue his own studies. He died in 1519 leaving behind one of the greatest body of artistic and scientific works. 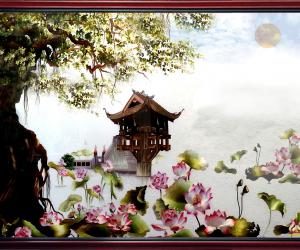 One Pillar Pagoda – A thousand-year lotus of Hanoi Capital 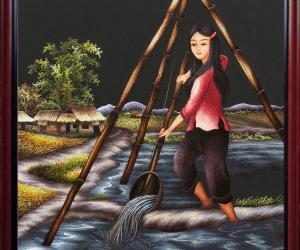 Hand-embroided picture: The girl’s scooping water in front of the temple
Gọi ngay